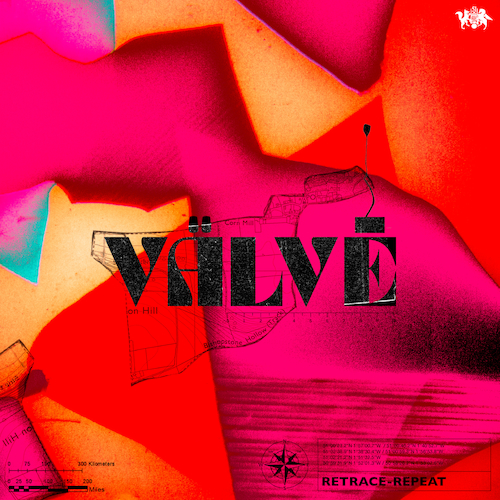 “Missing creating music together as VÄLVĒ, we set about remotely making individual tracks using environmental recordings from our scattered locations”

“We had a couple of tracks that we’d written in rehearsals and been playing live but not properly named or recorded yet. They were still evolving and changed a bit at each gig. With no gigs on the horizon, we set about recording parts for these remotely, fitting them together as they appeared in isolated form, remembering how they went live and reimagining structures, no longer constrained by practical things like channel limitations. As we started to make the album, the landscape started to reveal itself and the seven tracks examine the idea of our personal, current geography in different ways.”

“Retrace/Repeat is based on my pathfinder map and the markings made of footpaths discovered then retraced over time as I tried to get my bearings […] It got me thinking about our geographies all being connected by these lines, the very lines that Emma and Elen were tapping into to create their garden-based tracks.”

Geography is due for release 13th December 2021 via The state51 Conspiracy.

The physical version of the album will be the inaugural release in state51’s ‘51 Editions’ lathe series. Each record will be cut by Bladud Flies! and hand packaged in The state51 Atelier. The 51st edition is presented in a specially hand made box.

Artwork for Geography was developed by Louise Mason and was inspired by the OS pathfinder maps Chlöe used on her walks during the process of making the album. The geometric patterns that float by in the film map to the walking routes that Chlöe took as she got to know her new home.